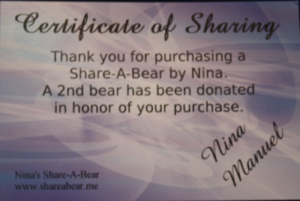 For each bear that I sell, I make and donate a “Share-A-Bear” to an organization that works with kids.  We donate to our local hospital’s pediatric unit, Toys for Tots, Shriner’s Hospital for Children, Children’s Healthcare of Georgia and many more. Shop with a purpose and help make a difference

Visit my ETSY store at NinasShareABear

My older brother Alan is a very inspirational part of my volunteer activities.  He started donating his time during his college years by participating in Alternative Spring Breaks to help kids with cancer.  He has also gone on three medical mission trips to foreign countries.   I was very proud to be able to raise money for his mission trip to Bangladesh in February, 2012.  He is also my inspiration for wanting to make and donate bears to hospitalized children.  I had the opportunity to join a Relay for Life team in April, 2013.  I came up with the idea of making bears to sell at the event to raise money for the team and also to raise money to make and donate a second bear.   With my parent’s help, we made bears to sell at the event.  Each person that purchased a bear filled out a paper bear that is donated in their name.  I was able to raise $285 for Relay for Life and start my “bear journey”.

Since April of 2013, I have sold over 2,500 bears, which means I have had the opportunity to donate over 2,500 bears.  I sell the bears on ETSY and I also attend local arts and crafts shows.  I have officially recruited my entire family to help me with this project.  I manage the budget, select the materials, and organize donations.  My dad cuts out the bears, my mom sews the bears and stitches the eyes, and my grandmother enjoys sewing up the stuffing hole in the bear’s back.  I call my brother Josh and my grandpa, the “bear runners”, because they shuttle the bears between my house and grandma’s house.  I have even sent a box of bears to my grandmother in Louisiana and she sews the fronts and backs together so we can stitch the eyes.  She went with us to Orlando to deliver the first set of 80 bears to the hospital.

I have used my bear sells to raise and donated money various organizations and fundraising events.  Over the past few years, I have raised money for the American Red Cross, American Cancer Society (Relay for life), Autism Awareness, Alzheimer events, and Toys for Tots.  A family friend used my bears as a fundraiser to raise money for her adoption fund.  The fund received $15 for each person that was purchased with her adoption code and I also got to make and donate a second bear to the children.

I get a lot of pleasure seeing how happy my bears make people.  Even though I do not get to personally give the bears to the children in the hospital, I know they brought smiles to the children.  It is really fun to watch people buy the bears.  They talk about all kinds of memories.  One of the most interesting requests is to make “memory bears” out of the clothes of deceased loved ones.  We have made over 200 memory bears that have helped keep the memories alive.

I made 20 “Firemen Hero” bears for the 19 fallen and 1 surviving firefighters in the tragic Arizona wildfire.  I sent the bears to the administration department at the Prescott City Fire Department.  Each bear was personally delivered to the families by a department liaison.  I received some really sweet notes of appreciation from the families.

Jesus tells us give unselfishly to the needy.